Compulsory season is well under way. Even if this is your first season on the competitive scene, you’re probably a pro at spending four hours at a gymnastics club to watch your daughter for a total of maybe five minutes of gymnastics. (It’s sounds awful, but it’s weirdly exciting, isn’t it? It is, you know it is.) You have the snacks, the cushions to sit on, the prepared answer when she inevitably asks for a new leotard or t-shirt or gym bag that’s on display. You are old hat at this.

Well, in case you didn’t know, there’s a whole lot going on behind the scenes (actually it’s right in front of you because it’s a completely open gymnasium, you just don’t know it’s happening). Every meet is a brand new situation and no matter how hard your coaches try to prepare your daughter for every possibility, there are always variables you, as the parent, will never see.

As a coach, showing up at a meet means being prepared to think on your feet, make split-second decisions, and handle every possible outcome with your athletes and team. For starters, there is determining the line-up. Yes, even gymnastics has a line-up. Every gym does this differently, but at ours I know that the first kid up on each event is the most consistent, steady gymnast they’ve got. It’s a huge compliment to be put first because it means the coaches trust you enough to hit your routine and lay the groundwork for your teammates. But what if your most consistent gymnast had a terrible warm up? Or had a really rough week at practice? Who do you put first? Do you trust that she’ll handle the pressure when the time comes or do you pass that torch to someone else?

Next comes the equipment. Most people who have never participated in the sport don’t give much thought to the equipment the girls compete on. Trust me, the gymnasts do. Every gymnast is used to the way the floor bounces at her gym. The bars are chalked up just the way she’s used to on her home turf. And sure every beam is four inches wide, but there is always that meet with that beam she could swear is only 3-and-a-half inches wide… and why on earth is it bouncy?

It doesn’t seem like it should be a big deal, but these tiny factors can have a huge impact on your daughter’s meet. Would you like my own personal, embarrassing ‘for example’? When I was competing the vault was not that nice, tongue-shaped tabletop you see today. It was a horse, much like the men’s pommel horse still is today minus the bars on top. Vault was one of my better events, I never worried about it too much, until we showed up at a meet in Arizona. For whatever reason, the host gym had entirely Spieth Anderson equipment, and SA equipment in those days was made of cloth instead of leather. My brain immediately went “cloth=slippery=nope.”

I was a level 9, vault was our first event, and I did not manage a single practice vault that did not land on my face. Naturally, my grandparents had driven all the way from Colorado and brought along a family friend to witness this equipment freak out. Competition began and it was not pretty. Jason, my saint-like coach, decided it would be wise to stand there for my vault in case he needed to save my life (a split-second decision I was grateful for later), something he’d never needed to do in a meet before. My vault was a tsukahara (you don’t need to know what that is, just know it involves a back flip). I landed the first one on my face after my hands slid off the vault the same second they touched it. My second vault was worse considering I missed my hands entirely and I’m pretty sure Jason was the only reason I even made it to my face instead of the top of my head. It was ugly. So ugly I got a zero and the judges actually apologized to me. Apologized. (I’ve never heard of that happening before.) Because your skill does not count as a skill if your head lands before your feet. Oh. Right.

I’d like to say the meet improved from there, but it really didn’t. The bars were slick, causing myself and a lot of my teammates to peel off on our dismounts, and floor was just a total disaster (I left both copies of my floor music at the hotel like a champ). I don’t actually remember beam, but I do remember that my gymnastics club didn’t return to a meet in Arizona for at least a decade. (I’m not even kidding.)

My point is this, there’s a lot going on at a meet, and a whole lot of nerves on top of it. Gymnasts are superstitious, and creatures of habit, and the smallest things can throw off an entire meet. It doesn’t always make sense (a cloth vault should not a disaster make), but it’s reality for your gymnast and her coaches. A certain brand of equipment will throw her off kilter, a certain judge will always make her extra nervous, competing right after a certain teammate will make her doubt herself. These are the minutiae of gymnastics and, for better or worse, we love it. So take every meet as it comes, knowing there’s always the next meet to fix a botched one, or even a next season to redeem herself.

Learning to compete well takes time; help your gymnast enjoy it by enjoying the spectacle as a parent. And it’s okay to laugh when your daughter completely forgets to salute the judge and has to run back onto the floor to do it.

Me, as a level 9. Just to complete the embarrassment.

What has surprised you the most about this competition season?

The beginning of fall means the beginning of gymnastics compulsory season. Compulsories are the first levels of competitive gymnastics, named such because every gymnast does the same routines, the same skills. For spectators this means you’ll be listening to the same floor music over and over and over again. For the gymnasts it means they’re doing the exact same routine as the girl before and after them, so you have to make it look better than they did if you want to score higher. It can be challenging, especially if you’re brand new to it. Mostly, though, it’s very exciting.

I still remember my first meet with startling detail considering it was 22 years ago. My gym has a policy of training one level ahead of what you’re competing. At the time, I was pre-team (we were called gymstars) and we learned the level 5 routines so that when we moved up to level 5 we were beyond prepared. There were a few of us who were ready to move up a little early, so they had us compete in a couple level 5 meets as gymstars. Now, as the owners’/coach’s kid there was always a little extra pressure on me. Never pressure to win (my parents were the opposite of those gym parents, despite their careers), but pressure to prove I deserved to be at whatever level I was. Truthfully, I think most gymnasts feel this pressure. No one wants to be moved up a level just to bomb a whole season.

My first meet also happened to be Pike’s Peak Cup, which happens to be my club’s host meet. It’s still one of the bigger invitational meets to this day (and a Nastia Cup qualifier) and attracts clubs from all over North America. Needless to say, I was feeling the nerves. And it showed. I vividly remember tripping on my squat-on on bars (a move where you simply put your feet on the low bar to jump to the high bar) and face planting. Uneven bars and I ended up having a very antagonistic relationship throughout my gymnastics career — hilariously ironic if you know anything about my dad. I also forgot an entire pass of my beam routine, which means I pretty much skipped half the elements I was required to do. Needless to say, it was not my best meet (still not my worst, but that’s a story for another day). But it was an excellent introduction to competition. The inevitable butterflies before you mount beam, the crushing disappointment when the entire audience watched you land on your face (they didn’t, only a few people saw it, surely, but it feels like everyone). It was an experience I fell in love with, a love that never diminished in my years in the sport, and one that I still miss today.

Gymnastics is a tough sport to choose to compete in. It requires a level of perfection that very few sports can compare. It’s not like any team sport where even if you have a bad game, your teammates can make it up for you or vice versa. The pressure is all on you because no one can do your beam routine for you. It’s remembering to point your toes and keep your head in and squeeze your legs together and push tall through your shoulders, all at the same time. And that’s just for one skill, three seconds of your minute and a half floor routine.

You, brand new compulsory parent, are in for a roller coaster of emotions and experiences with your daughter. There are going to be meets that make you wonder what the heck she has been doing all this time at practice because surely she knows how to keep her legs straight. There are going meets when she’s so nervous that you’re convinced this level of anxiety can’t be healthy. But then, there will be meets where you see her reach the podium, or finally stick that beam routine, and nothing will beat the smile on her face or the enormous boost of self-confidence that can provide. And in the end, that’s what the sport is really all about.

So if your daughter or granddaughter or friend is feeling extra anxious this compulsory season, don’t try to diminish her worries. Be supportive — wrap that extra tight ponytail into extra tight spiral curls, ply her with enough Gatorade and PowerBars to last a month in the wild (or don’t; to this day I can’t eat a PowerBar without wanting to gag). Be happy for her no matter how she competes — no one is more disappointed than she is that she fell three times on beam, after all she’s the one who has put in the hours at practice. Mostly, just be there (even if it means not actually being at the meet because oh my gosh grandma your presence makes me eight hundred times more nervous). In the end your support, whether physical or emotional, will mean everything to her.

Tell me, how do you help your gymnast prepare for meets? Answer in the comments below. 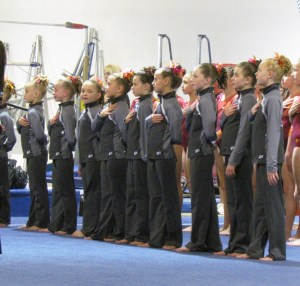 Listening to the national anthem before the competition begins. Photo courtesy of Erin Pelton.